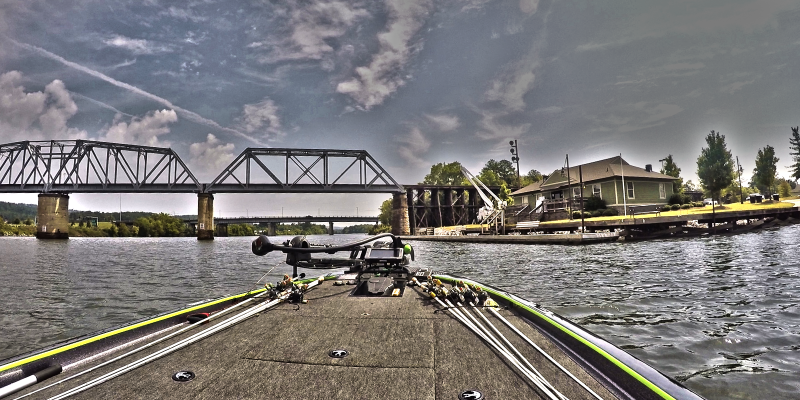 After the Coosa River was dammed, the wild water was lost but wild fishing remains for bass anglers.

The days are growing shorter, football is in the air, and on LakesWeiss and Neely-Henry, Alabama bass anglers have plenty of reasons to rejoice.
In particular, a certain angler on this warm late summer/early fall evening had about seven pounds worth of reason to rejoice. Here’s what happened.
Earlier on this September day, the air had been almost full-summer warm, but as the evening shadows fell across the water where a large tributary stream fed into the main body of the lake, the temperature grew much more pleasant while the angler worked the still water.

A long cast with a silver-colored crankbait put the angler in perfect position for a retrieve along a row of old, long-dead tree stumps. The angler brought the strong-thumping lure back in a slow and steady retrieve until the lure bumped (accidentally on purpose) into one of the underwater stumps. The angler let the crankbait stop for just a moment as the floating lure drifted upward from the stump it had hit.

The lure never made it to the surface. A massive swirl and a very strong strike pulled the tip of the angler’s rod down toward the water, and a short but stressful fight began. A very strong fish tried its best to run back to the potential safety of the row of old stumps, but the angler worked the fish carefullyâ€”a little luck never hurts in times like thisâ€”and got the fish alongside the boat.

A quick reach and lower-lip grip was made by the angler, and a beautiful largemouth came aboard. It took only a moment to remove the back treble hook from the fish’s jaw, and the angler allowed himself another moment to admire the fish before it was lowered back into the water and set fee.
As the fish finned away back into its home waters, the only thing that kept this moment from being perfect was the angler’s thought, “Why can’t I ever catch a good one like that when I’ve got a buddy along who I can brag to about it?”

There are not many places better than the Coosa River lakes in eastern Alabama for anglers who want to find and catch a bass worth bragging about, and September is just about the best time of the year to meet up with a braggin’-size bass.

Read the rest over on gdomag.com >