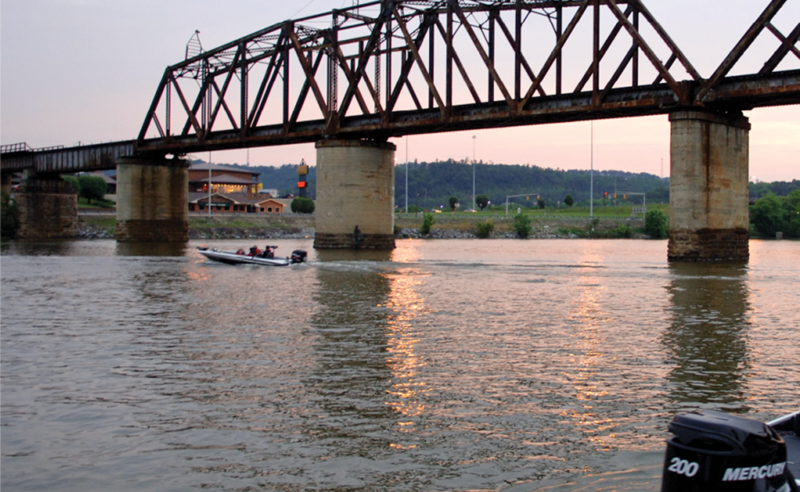 Neely Henry Lake attracts throngs of Alabama bass fishermen, but visitors from out of state tend to overlook it. One reason for this is that the enormous largemouth bass in Lake Guntersville swim just a short cast to the north of Neely Henry.

Although lunker largemouth are scarce at Neely Henry, it harbors an exceptional trophy spotted bass fishery. Add that the lake ranks third statewide in angler success, and you begin to understand Neely Henry’s local popularity.

There are typically three weeknight pot tournaments at Neely Henry spring through fall, plus bigger events on the weekends, claims local bass nut Jason Grape. Grape lives minutes away from the lake and has fished it intensely for nearly three decades. “Some of the bigger tournaments draw 200 boats,” Grape says. “It makes for crowded fishing, but everybody still catches them.”

That this relatively small 11,235-acre reservoir withstands such pressure and continues to produce excellent catch rates is a testament to its fertility.

As good as the fishing can be here, you must tune into Neely Henry’s quirks or you’ll struggle to get bites. A river-run lake, Neely Henry winds 77.6 miles upstream from the H. Neely Henry hydroelectric dam to the Weiss Lake dam. From Weiss Lake down, much of Neely Henry’s length is the narrow, winding Coosa River. Neely Henry begins to widen south of Gadsden.

Frequent fluctuations in the lake level and current flow keep Neely Henry’s bass on the move as they follow baitfish. You may be catching a bass on every cast for 20 minutes and then they’re gone, Grape points out.

Although spotted bass are the predominant species, largemouth do win tournaments at Neely Henry. This is especially so in the spring when spawning activities pull them shallow. April and early May are typically the best times to tangle with largemouth here.

The largemouth flock to docks and waterwillows, known locally as Coosa River grass, which grows in the shallows. The waterwillows in Canoe Creek should be on your hit list when you fish Neely Henry in springtime. The most consistent largemouth tactic is swimming a jig through the waterwillows and tight to boat docks.

Read the rest over on BASSMASTER.com >