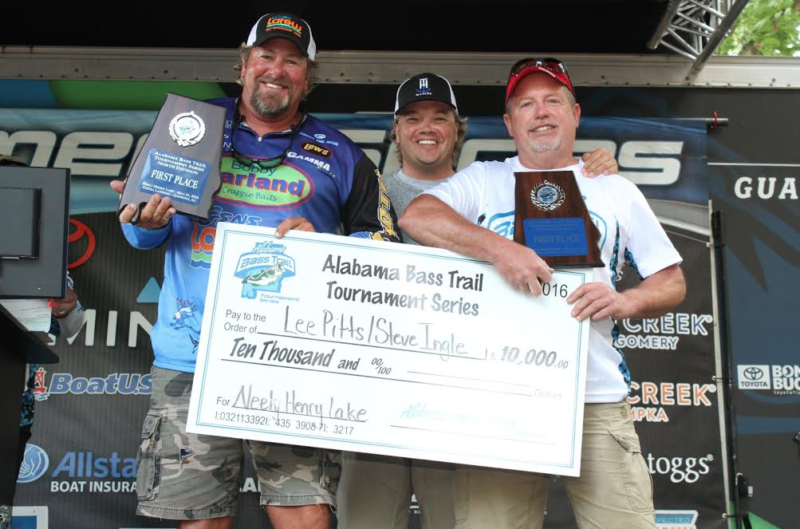 Gadsden, Ala. May 21, 2016 – Every time that the Alabama Bass Trail North Division visits Neely Henry Lake in Gadsden, the sheer numbers of fish weighed-in can be astounding.  While Alabama is known for its Tennessee and Coosa River fisheries, Neely Henry is just beginning to show how good it can be.

For noted area guide, Lee Pitts and his partner Steve Ingle, Neely Henry showed out a little bit better than the other 145 teams that launched into the cool morning air out of Coosa Landing in downtown Gadsden.  The Weiss lake crappie guide and his partner posted a five bass limit weighing 18.12-pounds to earn the title of ABT Neely Henry Champion and a berth into the 2016 Alabama Bass Trail Championship in October on Lake Eufaula.

The team said that everything kind of fell into their laps, but they were unsure if they had done enough.  “We ran downriver and started fishing about four miles from the takeoff initially,” they said.  “We had a limit by 6:20, and were able to cull up a few times until about 1:00, but, we still felt like we were one fish short of a winning sack; we are truly surprised by this finish.”

The pair reported using a 4.5-inch Gene Larew Lures Mega Ring Tube on a 3/8-ounce tungsten weight and a Bill Norman Lures Deep Little N to catch their fish.  “Most of the fish were caught flipping and pitching the green pumpkin, chartreuse dipped and Pumpkin Seed Candy colored tubes on a 7’3” heavy action Lew’s Performance TP1 Speed Stick and 6.4:1 BB-1 reel spooled with 17-pound-test Gamma monofilament, they said.  “We caught a few on the Deep Little N, but mostly we flipped the tube to the water willow grass and around docks in the mid lake area, all the way to Canoe Creek.”

They reported catching as many as 40 bass, and making key culls up until 1 o’clock in the afternoon.  They weighed-in in the second flight and had to wait five more flights to learn they had claimed the $10,000 first place prize. “We’re really happy to have won,” they said.  “We’re just so lucky to be here, everything kind of went our way.”

Damien Willis and Mark Steward began the morning tossing a Booyah Padcrasher frog into “Coosa River Grass” (water willow) to catch a pair of key largemouth, then filled in the rest with a Reaction Innovations Sweet Beaver and a homemade jig tipped with an Excite Baits Craw the flipped into the same kind of grass.  “We really are okay with how things turned out,” they said.  “We really did the best we could have based on how our practice went; this is a good outcome, we’re pleased with it.”  Their 17.66-pound limit earned them the $5,000 runner up prize.

The leaders of the Northern Division Angler of the Year race John Canada and Brian Roy continued their strong year and finished third earning $4,000 for their day.

The Mountain Dew Big Bass of the tournament was a 5.61-pound largemouth caught by Jeff Cannon and Shawn Brock.  That fish anchored their 14.62-pound total which earned them 17th place and a total of $1,000 including the $500 bonus from Mountain Dew for catching the largest bass of the day.

The top 10 in the standings are below – the complete standings can be found at: https://www.alabamabasstrail.org/tournament-series/nhl-results/