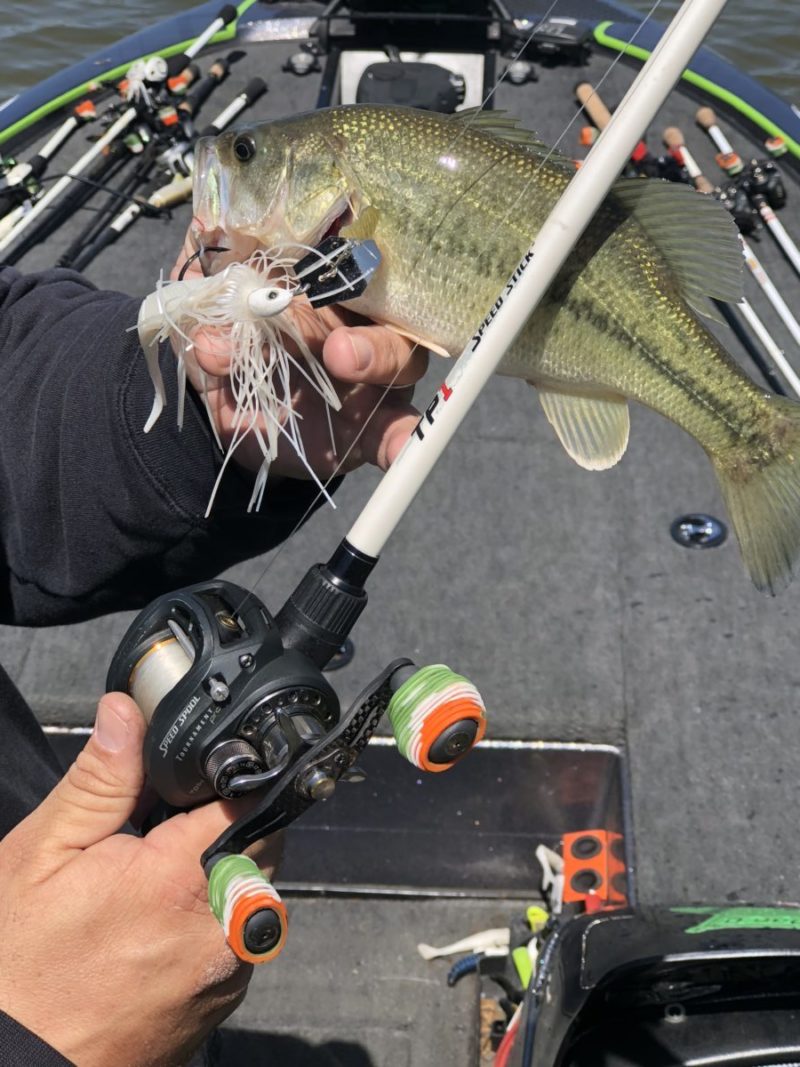 Conditions are starting to become very favorable on Neely Henry Lake for the bass angler.  With recent storms, the water has some good stain to it, and with the warming conditions of late, and the waxing to full moon this week, the bass are on the move.

The easiest bite on the lake is the shallow largemouth in pockets and feeder creeks along the middle of the lake.  I spent a half day fishing out of Rainbow Landing on Saturday, April 28 with Westbrook Christina High School angler Micah Goosby in pockets and creeks around Godfreys and downriver towards Ohatchee.  The water temperature hovered around the 63-degree mark throughout the day and we looked in the shallows thinking that fish would be spawning, but we never saw any locked on the bed.

We did find a strong pattern fishing in the pockets with a 3/8-ounce white Chatterbait matched with a Strike King Blade Minnow for a trailer.  We made casts to the skinny water where the docks meet the bank and slow rolled the bladed jig just out of visibility in two feet of water on a 45-degree angle back towards the boat.  We caught one and had some swirls on a white, 3/8-ounce Davis Bait Company J Series Swim Jig with a Pearl Baby Rage Craw as the trailer as well.

Together, Goosby and I hooked up with three limits of largemouth bass, losing four in the process.  Most of the fish we caught were between 12 to 15-inches, with one that was lost pushing three and a half to four pounds that jumped and threw the bait.

The bite seemed to be a little better in the front half of the creeks and pockets as the water was falling a little throughout the day, and I suspect that the falling water made the fish a little uncomfortable with their ceilings falling as they were.

Along with a fun fishing day, I spoke to a few anglers who fished the ABA Ram Open Series tournament on the same day.  Dustin Seaborn of Guin, Ala. won the event with 17.99 pounds, followed by Gadsden’s Andrew Johnson who finished second with 17.54 pounds.  Ashville, Alabama’s Allan Glasgow finished third for the day with 17.28 pounds.

The anglers I spoke to characterized the fishing as a little tough, with one of them saying that he had targeted spotted bass upriver with the heavy current running, but had to turn to shallow largemouth at 11:30 with Flipping and swim jigs to catch his limit that landed him the middle of the pack.

Both anglers I spoke to said that the majority of the fish weighed in were largemouth because the recent heavy rains have had Alabama Power running water at a high rate that has muddied the main river, causing many anglers to enter the creeks and pockets to Flip and throw swim jigs.  While we didn’t personally see any bedded fish, there were several anglers that reported seeing and catching spawning bass during the tournament.

To see the full results from the event, visit the website here – http://abaopenseries.com/Results18.php?EventID=8935