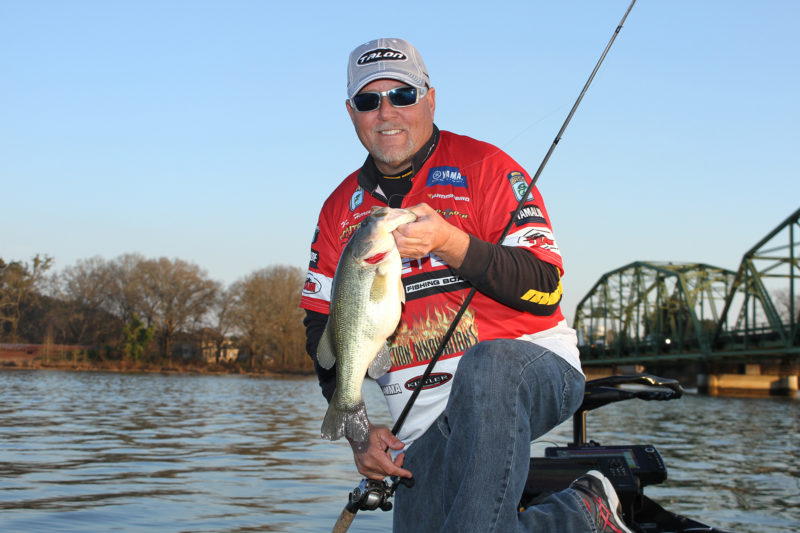 I hear there’s a pretty big tournament going on at my home lake next week.

While I would love to be at the Alabama Bass Trail tournament meeting on Friday and the weigh-in on Saturday at Coosa Landing in Gadsden, I’ll be competing in the Toyota Texas Bass Classic in Texas. When I saw that my travel schedule wouldn’t let me be there, I wanted to do a little preview to help y’all out a little on Neely Henry.

Neely Henry is the lake that I cut my tournament fishing teeth on when I was young and fishing with my dad. I still love fishing Neely Henry, and spend a lot of time on it when I’m at home before the Bassmaster Elite Series and on long breaks in between tournaments. Here’s what I’ve experienced over the years.

You really have to divide Neely Henry into three different types of fisheries. From the Gadsden City Dock to the Weiss Lake Dam, it’s a River fishery, as pure as it can be. The mid-lake section is a fishery that features bluff walls, a few ledges, but mostly dock fishing and vegetation, and the downlake section is your only chance for any real offshore fishing.

Now, I’m not gonna tell y’all where I would spend my time if I was fishing the Alabama Bass Trail event next week because that just wouldn’t be right, but I’ll give you some tips to try and help you plan and strategize for your practice.

In this period where a bunch of the fish at Neely Henry are in the postspawn period, I would expect that the big largemouth are mostly done, and some of the big spots are as well. I’d have my 112-pound Minn Kota Fortrex on high burning water in the morning to cover as much water in the as possible early, then slow down and try to get a big bite after that.

I expect that it will take a mixed bag of spotted bass and largemouth to win the event next week because most of the big spots have done their thing and have gone to their summer haunts and finding a 20-pound bag of them is just not going to be easy. The team that wins is most likely gonna have one of them 6-pound chunker Neely Henry largemouth in their bag.

I would start the morning looking for shad spawn activity, and I would have a topwater bait tied on because spotted bass love to smash a topwater lure. It could be a big walking bait or a buzzbait. I would also have a Santone Lure swim jig tied on in a shad color, because those shad like to spawn around the grass and seawalls as long as the lake is close to full pool. Expect to find spotted bass around those vertical objects.

After that, I’d turn to the grass with the Santone swim jig, but I’d also have a Reaction Innovations Sweet Beaver rigged with an Elite Tungsten weight to flip into heavy vegetation as the event progressed into the afternoon.

I think this is absolutely the best time of the year to fish Neely Henry. The bass are mostly done with their spawning, there is a shad spawn happening and the bluegill have probably gone onto the beds by now. With so much going on, the bass should be pretty aggressive and there should be a lot of fish caught next weekend during the Alabama Bass Trail event.

I wish I could be there to root y’all on, but get out there and show everyone why Neely Henry is one of Alabama’s best kept fishing secrets; have fun.